Tim is married to his wife Debbie of 45 years and they have 4 adult children and 11 grandchildren.  In November 2002, Tim and a core group of committed Christians planted Calvary Church in Sparta Illinois.  His favorite things to do outside of the ministry are spending time with his family, gardening, hunting and enjoying the outdoors.

Chris, Linda, and Riley Scott
Chris Scott: Student Ministries
﻿
Chris has been serving as Calvary's Student Minister since 2008.  Chris accepted the call into the ministry in 1989 and has served as a pastor for a congregation in Junction, Illinois for 2 years and led and active youth ministry in Beardstown, Illinois for 14 years prior to relocating to Sparta, Illinois in 2006.  Chris has a degree in Electrical Engineering from SIU Carbondale and has worked in the electric utility business for over 21 years.  Chris has been married to his wife, Linda, for 23 years and they have a daughter named Riley.  Chris is an avid golfer and enjoys spending his time with his family and playing golf﻿.﻿ 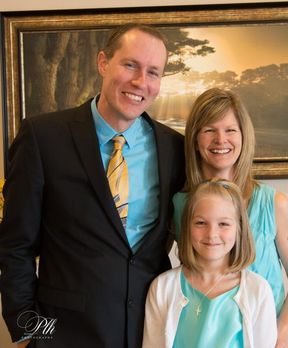 Rich came to Calvary in the spring of 2015 as Calvary's Associate Pastor of Worship and Discipleship.  Rich accepted the call to ministry at Southwest Baptist University in 1994.   He has served churches, as an associate pastor, in Kentucky and Missouri.   He has been married to his dearest friend Kelly since November 1996. Together they have an amazing little girl named Caris.  Rich enjoys playing guitar, reading books written by old (mostly dead) guys and hiking with his family.

Terry is a Licensed Clinical Professional Counselor and has provided counseling since 1992.  He has a Bachelor of Science degree in Psychology and a Master of Arts degree in Counseling from Liberty University in Lynchburg, Virginia and is a member the American Association of Christian Counselors.
Terry provides counseling at Calvary Church by appointment. Counseling issues Terry assists with include depression, anxiety, stress, grief, divorce recovery, and anger.  He also works with couples to provide marriage counseling.

The deacons are those who model spiritual service and work alongside of the elders to facilitate their leadership and teaching in the practical life of the church.  Our deacons are all non-staff members that sacrifice much of their time and resources to meet the needs of the church.
The Greek word for deacon conveys the idea of a servant.  Deacons are to serve under the direction of the elders, undertaking those areas of service necessary for the church's functioning that would otherwise prohibit the elders and other leaders from performing their biblical responsibilities.  No specific, ongoing roles are mentioned in Scripture, probably because service necessitates change and so the role of the deacons should be flexible.
Proudly powered by Weebly